I don’t know about you guys, but recently I’ve found it hard to maintain my membership of Team Hope. Trademark trolls issuing threats, scammers running rampant, clickfarmers hitting #1, innocents getting sanctioned while stuffers receive All Stars, narcissistic boxset promoters throwing lawsuits in every direction, plus Amazon generally acting like an absentee landlord during the Great Famine.

And then Friday happened.

First, a perma-disclaimer: I am not a lawyer. I have worked as a paralegal and seen more courtrooms than Lindsay Lohan, but that does not make me a lawyer or legal expert or dispenser of legal advice in any shape or form. And I’m Irish, so that goes double for American law.

I do have a passing familiarity with some legal language and procedures, so I’ll try and give a brief layperson’s summary of what happened yesterday, based on reading the transcript and following commentary from lawyerly types. Really though, I suggest checking out the savvy (actual) lawyers in the romance community who have been all over this from the start. Going through #cockygate on Twitter will lead you to all the right people pretty fast. Start with Courtney Milan if you’re lost.

None of them are providing legal advice on this either, of course, but they are much more knowledgeable than me (lawyers: please tell me if I get anything wrong here and I’ll correct).

#Cockygate has been rolling for a month now and is quite multifaceted — touching on some pretty existential issues for writers, and indeed all creatives. This post from lawyer Marc Whipple tracks the beginning, in case you have been in a coma for the last month. The story also broke out into the mainstream briefly where it was covered by Vox and The Guardian, among others.

More recent developments are as follows. Multiple authors made creative stands against Faleena Hopkins’ extremely questionable trademark and even more dubious attempted enforcement of same, in the form of various Cocky-themed books and parodies. Hopkins responded with a video — which she since took down, presumably in case it destroyed her acting career — as well as a series of equally ill-advised posts.

Hopkins then filed suit against three parties: Kevin Kneupper, the author/lawyer who is formally challenging her trademark; Tara Crescent, an author who had published books with Cocky in the title previously; and Jennifer Watson, a publicist for an anthology raising funds to cover legal expenses of authors affected by all this.

Again, Marc Whipple breaks down the issues — of which there are many I barely touched on, including how Hopkins sent legal threats to a variety of authors, forced Amazon to take down various Cocky books, and she generally doubled down wherever possible despite an outcry from the writer community.

In the papers filed, Faleena Hopkins was, among other things, seeking a restraining order against Tara Crescent from publishing anything with Cocky in the title, to have Kevin Kneupper’s trademark challenge stayed, to have her trademark affirmed by the court, as well as damages and attorney’s fees. She also attempted to force the public disclosure of Tara Crescent’s real name, which is a particularly nasty move that needs to be underlined again and again — particularly as that is still a danger here.

Thankfully for the Defendants, they didn’t have to wait too long for the initial hearing, which took place yesterday morning in New York. And the transcript is a delight.

More on that in a moment, we’ll deal with the serious stuff first. Kevin Kneupper was dismissed from the case right away, along with the injunction Hopkins sought against his opposition to the trademark claim. That will now proceed, although it may not be heard for some time. The judge also denied the restraining order against Tara Crescent, meaning that her ability to publish books and earn a living is unimpeded for now (stress and lawyerly dealings aside).

Faleena Hopkins’ trademark was also described by the judge as weak at best and he generally seemed unimpressed with the strength of her case and her lawyer’s arguments. I wasn’t in the court, and perhaps this is an author’s overactive imagination, but the transcript seemed overflowing with judicial shade and side-eye.

The next phase of the case is discovery, where Faleena Hopkins will be persisting with her attempt to force disclosure Tara Crescent’s real name. And it’s hard to view that as anything other than a spiteful move, also designed to intimidate others too. Romance authors have innumerable legitimate reasons for writing under pen names — seriously, check out 99% of media coverage of romance — and everyone is entitled to privacy, of course.

As a romance author herself, Faleena Hopkins will know this as well as anyone. Which makes it particularly dickish. But being Faleena Hopkins cuts both ways, and she continues to be her own worst enemy in this case. As Marc Whipple put it, “Ms. Hopkins is really going to regret some of her posts and that video, in my opinion, because they are going to be used to impeach her affidavit.” Indeed.

Before Discovery takes place, the remaining Defendants have indicated they will seek to get the case dismissed. They seem confident in their chances and I wish them the very best. Although part of me will be disappointed not to get further transcripts like this.

The author community — and romance writers in particular — got another piece of promising news last night. Amazon dropped a bomb of their own, one aimed squarely at that slimy circle of All Star book stuffers. KDP has updated the Content Guidelines pertaining to “bonus content” to make the rules against book stuffing — the practice of shoving multiple titles in each ebook file to inflate Kindle Unlimited payouts — even clearer and more unambiguous.

Yo Chance, what are you doing this weekend. Formatting maybe? #TiffanyGate pic.twitter.com/bDZkHOo7ag

You can peruse it here yourself, but there are four key parts.

If you missed the beginning of #Tiffanygate the last in particular might puzzle you, but what kicked off the latest focus on the infamous circle of bad boy stuffers was this TOS-breaking, and possibly illegal, review-generating competition from Chance Carter — the unofficial leader of the book stuffers.

"Bad boy author" Chance Carter is taking a huge risk by incentivizing and manipulating reviews in this manner which is absolutely against the @AmazonKDP TOS.

But no action taken + another Kindle All Star for him this month. pic.twitter.com/r9VDXdV8xs

The book in question — Mister Diamond — was stuffed to the gills, because of course it was.

And here is that book by "author" Chance Carter. That's six already published books stuffed in the back. And an inducement to click to the end. It's cheating authors of their income, taking food from their table. And @AmazonKDP ignores it, and keeps giving him All Stars. pic.twitter.com/FaHYWLt5uk

As per usual there was a Click To The End inducement, as you can see above. Another author also found instructions to his street team clearly aimed at ensuring that max payout for each stuffed book.

And I also discovered that those other books stuffed inside were breaking Amazon’s exclusivity rules.

PSA: Chance Carter also runs the newsletter swap service Bookclicker. This service requires you to give the site the API for your newsletter provider. In case you don’t know, when you grant a site an API that is giving them full admin-level access to your email list. Up to you if you think that is wise…

I’m not linking to Mister Diamond because I don’t want to encourage review bombing — which is inappropriate in any circumstances, even when the author in question is engaging such blatant cheating. But I do want to point out that it is still available for sale. You can check it out yourself. It’s not rank-stripped either. In fact, it’s doing very well on Amazon. 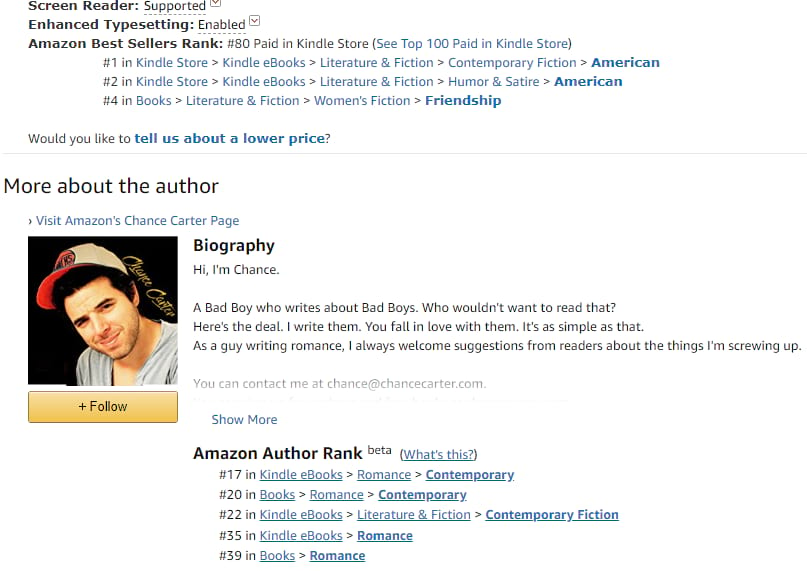 This bonus content clarification from Amazon is welcome, but what change this brings about depends on whether KDP actually bothers enforcing the rules this time — something that has been very patchy to date. My hope is that simplifying the rule will allow ground-level staff, or algos I guess, make an easier determination about is permitted, and that this is the beginning of a wider crackdown. Perhaps that is wishful thinking on my part.

The pressure must be kept on Amazon to actually enforce the rules now, and I strongly recommend that you continue to report authors flouting the guidelines — I haven’t seen any of the bad boy stuffers change tack yet. Perhaps they don’t believe Amazon will follow through.

Let’s make sure that happens, people.

UPDATE: Just going to leave this here for you to ponder.

People of #Cockygate – I almost forgot. You know what's interesting? Faleena Hopkins and bad boy stuffer Chance Carter had the same PA for a while. What a coincidence!!! #Tiffanygate pic.twitter.com/es2QEFtb3G

UPDATE 3 (June 6): Aaaaand Chance Carter is back on sale. I make that about 18 hours offline for that one book. It now has the competition and stuffed books removed, but all his other books are still stuffed to the max. Great job Amazon!

Born in Ireland, he now lives in a little fishing village in Portugal, although this hasn’t increased the time spent outside. He writes novels under another name, has helped thousands of authors build a readership with his books, blogs, workshops, and courses, and has created marketing campaigns for some of the biggest self-publishers on the planet. Friend to all dogs.

NF newsletter- DO NOT MODIFY

My weekly newsletter is packed with tips and tricks, plus you’ll score an exclusive FREE copy of FOLLOWING.

Click the Confirm button on the email I just sent.