HarperCollins now has another Christian vanity press subsidiary with five-figure publishing packages, but this time the Big 5 publisher is also pimping out its sales reps and distribution network to sell the idea to novice authors. Elm Hill Books was launched last year and is the brainchild of Pete Nikolai – the longtime Director of Publishing Services at HarperCollins Christian Publishing. And both have form when it comes to exploiting writers.

Learning from Author Solutions at WestBow

In 2009, Pete Nikolai was working for HarperCollins subsidiary Thomas Nelson when, together with its CEO and Chairman Michael Hyatt, he partnered with Author Solutions to create WestBow Press. WestBow is a white-label Christian-flavored vanity publisher, pretty much the same any other Author Solution vanity imprint, just with a few crucifixes dotted around the place.

While Michael Hyatt subsequently reinvented himself as some kind of greasy life coach, Pete Nikolai ran WestBow as its Publisher, overseeing the sale of sub-standard publishing packages and countless, worthless marketing packages costings thousands of dollars. These marketing packages were sold using high-pressure sales tactics to unsuspecting newbies who had no business purchasing them, and little chance of recouping their investment. Not that you would know this from the kind of glowing coverage that Publishers Weekly gives WestBow.

Those marketing packages were usually sold in the most disingenuous ways too, dangling impossible dreams in front of vulnerable writers who had no idea how this industry worked. Here’s one example from the dozens of different packages available from Pete Nikolai’s WestBow Press:

And another (I really could do this all day):

These deceptive business practices led to an outcry among writers, to the point where several companies – such as The Bookseller, Writer’s Digest, Bowker, and Barnes & Noble – all terminated partnerships with Author Solutions, no doubt mindful of the increasing reputational damage from engaging in such author unfriendly practices. But some large publishers like HarperCollins have gone in the opposite direction.

Pete Nikolai worked closely with Author Solutions over the last nine years as Publisher of WestBow Press. He obviously liked what he saw because he decided to build something in its image with Elm Hill Books. While there are some differences with the typical Author Solutions clone, that is where things get truly worrying for anyone who wants to keep clear lines between vanity publishing and its traditional, legitimate counterpart.

The approach from Elm Hill Books is nothing revolutionary, despite its bombastic claims. Publishing services are powered by FastPencil and Accurance, and offer the usual sub-par services you can find at other vanity presses it works with. In other words, HarperCollins staff won’t be editing your book or designing your cover.

Marketing services are the typical selection of questionable services you will see at any vanity press too. You can get a “web-optimized” press release, in a phrase neatly cribbed from Pete Nikolai’s pals at Author Solutions. You can get an “Amazon Preview” – which is really just the Amazon Look Inside program that Amazon does for every book.

You can become a “Professional Certified Author” — a meaningless, invented badge which will do nothing more than mark you out as a certified victim of a vanity press in the eyes of real pros (people who make a living from writing, a category unlikely to include anyone published by Elm Hill Books). That’s one of the “Revolutionary Services” offered by Elm Hill Books which includes bleeding edge innovations like “your title will be listed on Goodreads” – another service publicly provided by Amazon to any author, free of charge.

These marketing services are bundled with the publishing packages themselves, which start out at $1,399 for a bare bones package – one which doesn’t even include editing – right the way up to a staggering $13,499 for one of the top-tier “Gold Leaf Packages.”

While the basic publishing packages are overpriced for what would be a terrible way to publish your work anyway, it’s the higher-end packages which attract the most concern. And this is where HarperCollins’ hands get really dirty, and where the usual arms-length denials will hold no water.

The $13,499 package is full of all sorts of execrable crap like those aforementioned “web-optimized” press releases, which no one will ever open, let alone read or act upon; “advanced reflowable ebook formatting” which is a completely standard (and very cheap) service; free-to-anyone items like a Google Books preview or Amazon’s Look Inside or a listing on Goodreads; and a “Premium Seven-Page Website” – cookie cutter affairs of laughable quality.

But it’s the most heavily touted aspect of those top tier packages which are most troubling, and which pose serious questions for HarperCollins and Pete Nikolai. The incredible cost of the three “Gold Leaf Packages” – an obscene $7,799, $9,499, and $13,499 respectively – are justified by the dangling of access to bookstores.

This sounds good on the surface – the point, I guess – until you look a little closer. HarperCollins sales reps won’t be pitching your book to stores, let’s be very clear about that. At best, you’ll be buried in some catalogue. No one will be selling your book to stores. This is a chimera, explicitly designed to hook newbies who don’t know how this business operates. For any of them reading reading, let me explain how it actually works: HarperCollins will publish over 1,000 titles this year and the sales reps won’t even have the capacity to push all those in-house titles, which HarperCollins has actually paid money to acquire, let alone any dupes from Elm Hill Books.

Think I’m wrong about that? Elsewhere on the site, Elm Hill Books inadvertently reveals the true nature of what these packages entail: mere inclusion in the industry-wide Edelweiss catalogue, a service you can purchase elsewhere for a few hundred dollars.

An extra two grand to be slapped in a foreign rights catalogue? That takes some brass balls – especially when Elm Hill Books is grabbing half your foreign rights anyway. Yep, buried in the small print on an obscure page is the most hideous rights grab. Not only does Elm Hill Books purloin 50% of foreign rights/translations, audio rights, film/TV rights, and every other subsidiary right they can possibly think of, it also asserts the power to sell those rights without reference to the author, and without their permission. Grim stuff. 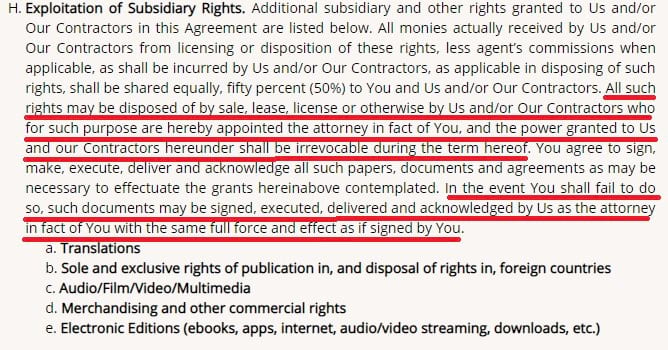 Back to the “Gold Leaf Packages.”

OK, I don’t even know WTF this is but it seems to cost an extra four grand for reasons that escape me, and I have a professional-grade imagination. It seems you can pick one city where HarperCollins sales reps will pretend to sell your book, you get some kind of… ebook which is, no doubt, packed full of advice cribbed from elsewhere, and then there is mention of some kind of exclusive selling window which is supposed to be a good thing?

I sincerely hope everyone was getting super high at this point and then just got distracted by pizza arriving because Elm Hill Books hasn’t even made a basic effort to pretend there is any kind of value in these packages.

Exploitative and lazy. Solid work all round.

I'd like to know why this behavior from @HarperCollins and @PFNikolai is deemed acceptable in publishing, and how this level of tawdry exploitation became normal. The culture of silence in this industry must end. https://t.co/URAJUyOeNN

How do HarperCollins sales reps feel about being pimped out like this? It’s not just the sales reps, but the HarperCollins name too. Even the marketing plays off this. Here’s a Facebook ad I saw this week. 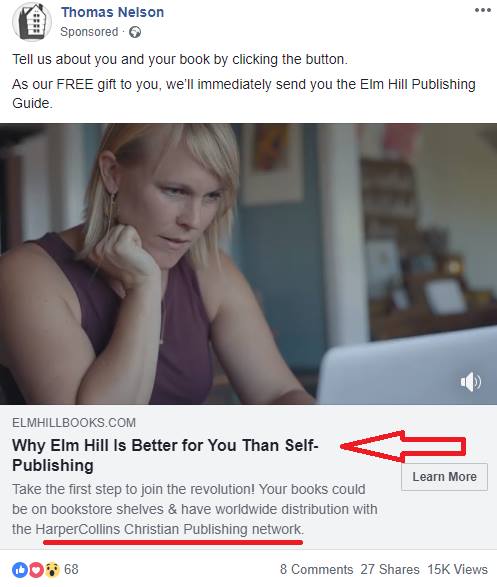 We’ve seen examples before of Author Solutions playing up its links to Simon & Schuster or Penguin Random House, hoping to fool newbies into springing for their shitty packages.

But that excuse can’t be made here. Pete Nikolai, Publisher of Elm Hill Books, is a HarperCollins employee – the Director of Publishing Services at HarperCollins Christian Publishing. It’s clear that Pete Nikolai ran Westbow in such a manner which afforded him free rein with Elm Hill Books. This is what he decided to create – and Pete Nikolai is happy to pimp out the HarperCollins name, run Facebook ads under the Thomas Nelson handle, it doesn’t matter. Whatever ensnares those novice authors.

Publishers like HarperCollins like to present themselves as guardians of literature and arbiters of taste and also writers’ champions, but I believe they show their true faces here.

As for Pete Nikolai…

Born in Ireland, he now lives in a little fishing village in Portugal, although this hasn’t increased the time spent outside. He writes novels under another name, has helped thousands of authors build a readership with his books, blogs, workshops, and courses, and has created marketing campaigns for some of the biggest self-publishers on the planet. Friend to all dogs.

NF newsletter- DO NOT MODIFY

My weekly newsletter is packed with tips and tricks, plus you’ll score an exclusive FREE copy of FOLLOWING.

Click the Confirm button on the email I just sent.